More Sold Signs than any other agent ... 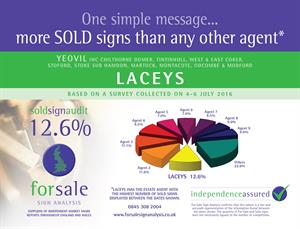 Based on an independent survey collected between the 4th & 6th July 2016, it was found that Laceys had more Sold signs than any other agent in the Yeovil area (including Chilthorne Domer, Tintinhull, West & East Coker, Stoford, Stoke-Sub-Hamdon, Martock, Montacute, Odcombe and Mudford) !

This is the second time this award has been bestowed on Laceys, the last time followed a survey between the 17th and 19th August 2015.

For Sale Sign Analysis confirms that this advert is a fair and accurate representation of the information found between the dates shown.  The quantity of For Sale and Sold signs does not necessarily equate to the number of completions.

Here you can log in or sign up to the members area of our website. Once logged in you can amend your personal details, add/amend/delete email alerts and access your saved properties. New property alerts are sent to your requested email address at your selected frequency once we publish a new property or a price change takes place.

You can register here!